A drill is a machine or tool with a chisel, reciprocating hammer, or rotating cutting tip. It is mainly used for driving fasteners or making holes through work pieces without tearing them apart. The tool can have any attachment, including a drill bit or driver depending on the application. 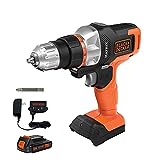 A power drill driver is among the oldest drill types and is used by the average consumer. It can either be cordless (battery-powered) or corded (electric-powered).

Its design is ergonomic in a way that it allows the swift movement of the hands without twisting them and it has for long been used to drill holes in wood pieces. With different sizes of screw bits, the drill can be used on vast distances across gaps.

This model is a fixed style of drill that allows you to clamp the material you want to drill as you use a level to lower and push the drill through the material. A drill press can either be mounted on a stand or bolted to a workbench or floor. It is also known as a pedestal drill, bench drill, or pillar drill.

Since it can be bolted or mounted on firm ground, using it requires less effort. However, it guarantees precision since the material being drilled is fixed and not moving but can be adjusted per the need. 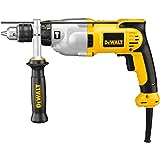 This model is closely similar to the electric drill only that it has a hammer action for drilling through masonry materials. The hammer action may, however, be engaged or disengaged depending on the needs and is provided by two cam plates designed to make the chuck pulse forward in a rapid move.

Most hammer drills have an input power of between 600 – 1000 watts with an efficiency of between 50-60%. This explains the use of such applications as drilling through concrete.